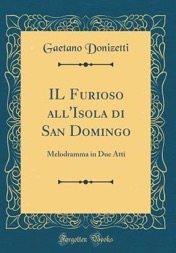 Il furioso all'isola di San Domingo (The Madman on the Island of San Domingo) is a romantic melodrama in two acts by Gaetano Donizetti. Jacopo Ferretti, who since 1821 had written five libretti for Donizetti and two for Rossini (including La Cenerentola), had proposed the unusual subject and he was contracted to write the Italian libretto based on a five-act play of the same title by an unknown author in 1820, which had been given in the same theatre and which Donizetti had immediately loved.
The opera was premiered at the Teatro Valle in Rome, Italy, on 2 January 1833 and was very successful throughout Europe—being staged in over 100 locations—but it disappeared after 1889, not to be seen again until 1958.