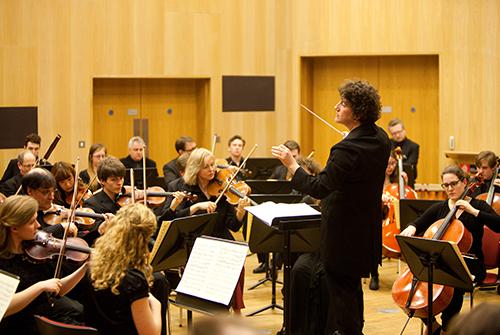 ROYAL HOLLOWAY IN CONCERT WITH THE LONDON MOZART PLAYERS

Marking the 250th anniversary of Beethoven’s birth, Royal Holloway, University of London, presents a programme of, and inspired by, his works. The uplifting Ninth Symphony, including performances by soprano Sarah Fox and The London Mozart Players, is complemented by Cecilia McDowall’s Ave Maris Stella and a new commission from Andrea Tarrodi.

Royal Holloway has a tradition of inspiring musical excellence which spans over 100 years. The university campus in Surrey is home to one of the world’s top music departments and ensembles of exceptional student musicians including the university’s Choir and Chamber Orchestra.

The Choir of Royal Holloway is considered one of the UK’s finest mixed-voice collegiate choirs. The 24 choral scholars, under the supervision of Rupert Gough, will be joined in this concert by the University Chorus and Royal Holloway alumni soloists including soprano Sarah Fox.

The Royal Holloway Chamber Orchestra is conducted by Rebecca Miller, and will perform side-by-side with The London Mozart Players.

Beethoven’s Ninth Symphony is a cornerstone of the Classical repertoire. Its uplifting theme of unity reflects Royal Holloway’s strong sense of community.

Complementing this is Cecilia McDowall’s Ave Maris Stella. It takes as its central theme words from Woodrow Wilson “the freedom of the seas is the sine qua non of peace, equality and co-operation”.

Taking inspiration from Beethoven’s work and legacy, a new commission from prize-winning Swedish composer Andrea Tarrodi will open the concert.