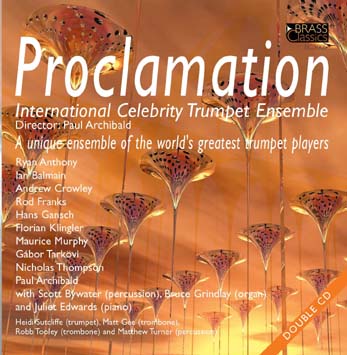 The trumpet has evolved remarkably in the last half century, and the rich pickings on this album are ample testimony to the wonderful expansion of the repertoire for the instrument.
It is difficult to imagine that even in the 1950s the instrument was still confined largely to its traditional role within the symphony orchestra. Only a few years earlier Hindemith had written some of the first chamber pieces for the instrument since the early nineteenth century. Even Haydn's Trumpet Concerto was only just recently being introduced to modern British audiences. But since then the instrument's status has risen to a point where it is possible for players to enjoy a solo career, thanks to the example set by Maurice Andre, Hakan Hardenberger and others. The combination of trumpet and organ has proved to be especially effective, both instruments traditionally associated with ceremony and sounding particularly fine in a large acoustic.

The technical wizardry of the modern trumpet-player gives a composer an unprecedented choice of idiom. The sine qua non of the instrument is its thrilling ability to respond to cavernous acoustics, clearly exploited in the music of Davies, Hakim and Francaix, and provoking the title 'Proclamation'. But the light and fleeting moments of the Koetsier, recalling Mendelssohn at his most playful, may come as a surprise, alongside the quasi-medieval serenity of McDowall, the slow and oriental evolution of Hovhaness, or the backward glances of Chance and Archibald, the one respectful, the other comic.

Mark-Anthony Turnage From All Sides