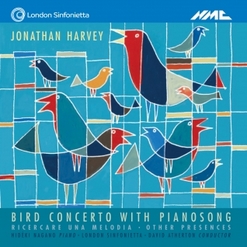 Update Required To play the media you will need to either update your browser to a recent version or update your Flash plugin.
Buy at

Bird Concerto - Harvey's hommage to Messiaen - is a celebration of the technical advances in electroacoustics. Other works on this disc are Other Presences, for trumpet and multi-loop effects, and two versions of the canonic Ricercare una melodia (1984)
Harvey started writing Bird Concerto when he was in California and says that 'indigo bunting, orchard oriole, golden crowned sparrow ... are some of the forty colourful Californian birds whose songs and cries sparked the ignition of this work'. The bird sounds have been innovatively transformed to create a mesmeric dialogue between nature and art. Harvey sets the piano soloist the challenge of combining piano playing and triggering a sampler/synthesizer so that the live electronics can be realised in real-time performance.

This recording received high acclaim for both music and performers - here are a few of the reviews:

'Harvey has been known for subtle handling of technology and the electroacoustic Bird Concerto with Pianosong takes the fusion of media into new expressive realms. Actual Californian birdsong opens the half-hour movement; the work proceeds as an ever-alert, rippling inventive dialogue between raw nature and musical modernism. Hideki Nagano's performance is scintillating' The Sunday Times