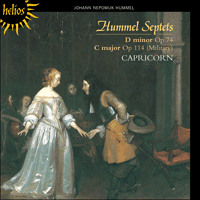 'Capricorn's combination of individual virtuosity with a persuasive sense of teamwork means both of Hummel's delightful chamber works really come to life. Hummel at his most dazzling, delighting us with his unpredictable instrumentation. The players vividly communicate their enjoyment of the music with scintillating performances' (BBC Music Magazine)
Some of Hummel's finest chamber music was composed during the 1820s, including the Grand Trio Concertant, Op 83, in E (1820), the Grand Quintetto, Op 87, in E flat (1821) and the Piano Trios, both in E flat, Opp 93 and 96 (c1822). The so-called Military Septet, dating from October 1829, is perhaps a less profound work, but that is very much in the nature of the genre. Military first movements were all the rage in Vienna at the turn of the nineteenth century, the most celebrated example prior to Hummel's Septet being Woffle's Grand Concert Militaire.

As befits a piece of this description, the trumpet is called upon in the fast movements to colour the music militaristically, its only real justification for this debut in the chamber music of the Classical period. Its use here can hardly be said to have caught on in a big way, but Hummel's piece undoubtedly inspired Saint-Saens to use the instrument in his Septet, Opus 65.

The Military Septet is scored for piano, flute, clarinet, trumpet, violin, cello and double bass, with a quintet arrangement along the same lines as the Op 74. Such was Hummel's enormous popularity at this time that the work was published virtually simultaneously in London, Paris and Vienna in 1830.

The ebullient Allegro con brio first movement immediately establishes the greater sense of equality between the various instrumental lines. After a piano-dominated opening, all the treble instruments have a go, trumpet, violin, then clarinet, and it is the clarinet which eventually introduces the wistful G major second subject.

The serenely drawn lines of the Adagio naturally dispense with the services of the trumpet, but the dramatic Beethovenian Menuetto (another scherzo), features the inevitable clarion calls in its gentle middle section, humorously recalled at the very end.

The various musical elements which combine to make up the Vivace finale, place the piece firmly in its historical context. For whilst there is an undeniable whiff of early Beethoven apparent in the melodic writing (and the throwaway fugato passage near the beginning), the fizzing arpeggiac figurations in the piano part clearly point the way forward to Mendelssohn. At the end, the music dies away enchantingly, in total contradiction to one's natural expectations.

from notes by Julian Haylock 1991