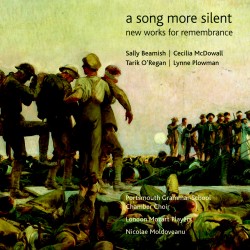 It was during the 11th hour of the 11th day of the 11th month of 1918 that the guns of World War I were officially silenced. A Song More Silent is a beautiful commemeration of Remembrance (Armistice) Day.
A song more silent features works by today’s leading crop of British choral composers, including world premieres by Tarik O’Regan, Sally Beamish and Lynne Plowman whose work Cries Like Silence is based on the E. E. Cummings poem “these children singing in stone” from which the title “a song more silent” is taken.