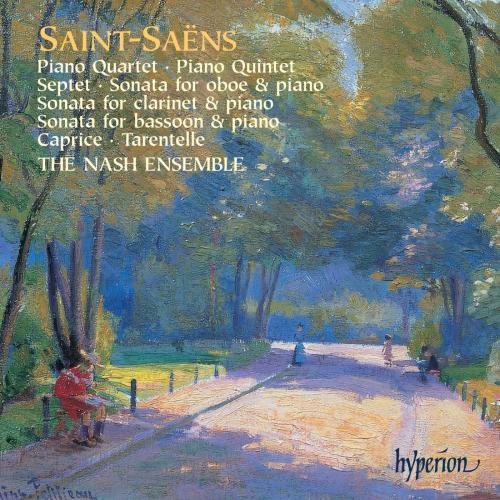 This double disc is a delightful selection of music for a variety of ensembles that ranges across Saint-Saens career, including the three woodwind sonatas that are some of his last works. The septet that opens the programme is a real delight - whimsical and witty.
The Septet in E flat major Op 65, composed for the unusual combination of trumpet, two violins, viola, cello, double bass and piano, was written at the request of Emile Lemoine for his chamber music society which he whimsically entitled 'La Trompette'. This society was founded in 1867 and Saint-Saens regularly performed there along with other well known musicians of the time including Louis Dilmer, Martin-Pierre Marsick, and Isidor Philipp. In this neoclassical work employing seventeenth-century dance forms, the two violins, viola and cello parts were often doubled in performance with an additional string quartet. To Lemoine, Saint-Saens confessed in October 1907: 'When I think how much you pestered me to make me produce, against my better judgment, this piece that I did not want to write and which has become one of my great successes, I never understood why.Lemoine had implored Saint-Saens for many years to compose a work combining the trumpet with the instruments ordinarily available to the society. Jokingly he would respond that he could create a work for guitar and thirteen trombones. In 1879 he presented to Lemoine a piece entitled Preambule as a Christmas present and played it at their first concert in January 1880. Pleased with the result, he promised that he would complete the work with the Preambule as the first movement. True to his word he performed the complete composition for the first time on 28 December 1880 with himself at the piano, Sylvain Teste with the trumpet, the quartet Martin-Pierre Marsick, Guillaume Remy, Louis van Waefelghem and Jules Delsart, doubled with excellent effect by a second quartet of Emile Mendels, Austruy, Johannes Wolff and Louis Heggyesi and the double bass played by Lucien Dereul. The four movements, labelled Preambule, Menuet, Intermede and Gavotte et Final, reveal the classical proclivity of the composer. However, the ingenious integration of the trumpet, namesake of this chamber music organization, with the string quintet and piano, is rare in musical literature.
from notes by Sabina Teller Ratner 2005

'These are full-blooded performances, packed with energy and colour, and every corner is turned under complete control' (BBC Music Magazine)

'[The] Sonatas are all played with an ideal combination of infectious virtuosity and phrasal sensitivity to have these all-too-rarely heard works come dancing off the page. Sensational flautist Philippa Davies is on hand to add her own special brand of artistry and producer Andrew Keener and engineer Simon Eadon typically capture the proceedings with their usual magical blend of warmth and clarity, making this an issue to cherish. The Nash Ensemble could hardly wish for a finer musical testimonial in this their fortieth birthday year' (International Record Review)